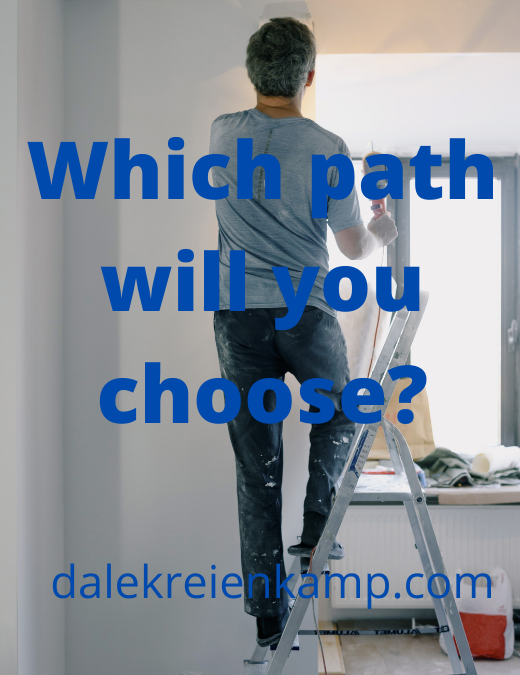 Which path will you choose?

Nicole has purchased new home. It would need a significant commitment of time and effort to get it back into shape. When she viewed the house during the inspection, she realized that it had not been well cared for. She didn’t know if they just didn’t know how or had given up and weren’t putting in the effort. It wasn’t just inside the house, in looking at the garden, she could tell it had once been beautiful. Since this wasn’t her first home, Nicole knew she had a decision to make about which path to take. She could put the time and energy into giving her new home the attention it needed to bring out the beauty that was there, that others couldn’t see. Or she could tear everything out, gut and remodel it.

Every leader who takes over leadership of new department, division, or organization, faces a similar decision. Do I “clean house” and bring in “my team” or work with the team I have? When it’s your turn to take over leadership, what will you do? Which path will you choose?

Too often I’ve watched leaders scorch the earth and bring in all new people, assuming whatever problems exist are because the current team isn’t good enough, or because they just want to hire their own people.

I remember meeting Dave, who had only been with his organization a year when the person he reported to “resigned to pursue other interests”, which of course means he was terminated. The person who took over, spent no time trying to get to know him, learning what he could and couldn’t do, or if he was open to changing, doing things differently. Instead, he immediately said, “it’s not personal, I just want my own team.” In an instant, Dave was unemployed.

When leaders clean house, there is a huge personal cost in the lives of those impacted, and there is a significant cost to the organization. Yet no one pays attention to these costs, it’s just accepted. Have you ever heard someone who counted the dollars paid out in severance pay, unemployment, and search firms, or do you know of someone who paid close attention to the loss of talent when those who were indirectly impacted said, “I’m out of here.” Those costs are brushed under the carpet.

And, if the new leader isn’t successful, the cycle begins again.

Throughout my career, in my own experiences taking over and watching other leaders, I have found the team that is inherited is usually fine and has many talented people. The team doesn’t have a talent problem, they have a confidence problem, which comes from a lack of great leadership.

Can you be the leadership they need? I believe it takes more leadership skills to revive, inspire and re-engage a team, than it does to fire them and replace them.

Rebuilding requires time, attention, and care, teaching them new ways that are needed to move forward. Show them how history isn’t where you live but provides lessons for a new future. They need you to have higher expectations than the previous leader and to hold them accountable, to not give less than their best effort.

Yes, it will take more time to re-build. Along the way you’ll deal with resistance to change and attitudes that need adjusting. But if you commit yourself to them, believe in them, your team will accomplish what you never imagined they could.

I will rebuild you, my virgin Israel. You will again be happy and dance merrily with your tambourines. Jeremiah 31:4 (NLT)