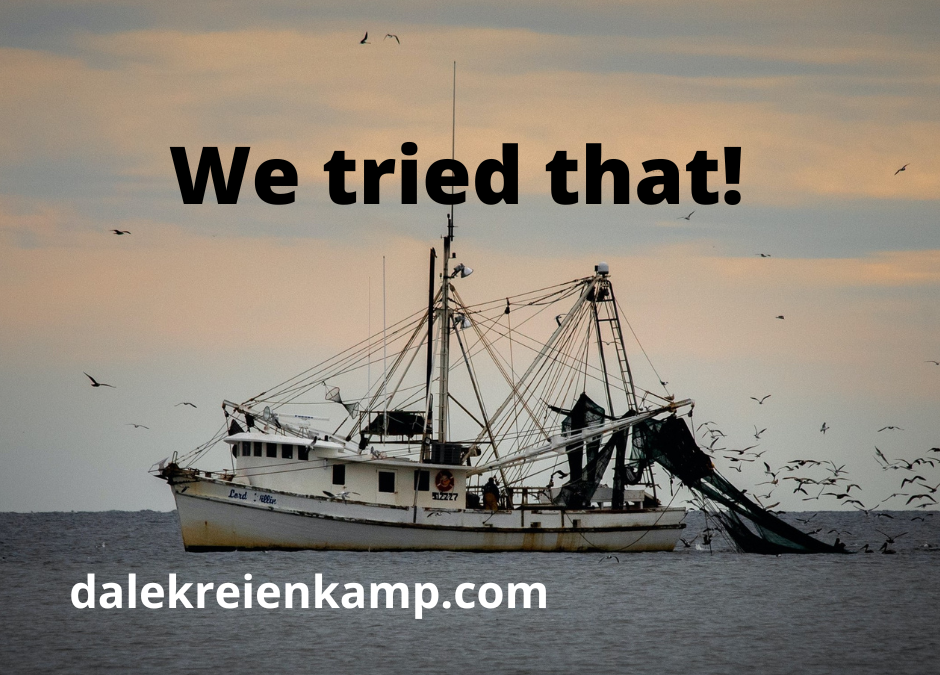 The sun was just coming over the rise of the hills near the lake. Their boat had slowed down and was drifting in. They weren’t happy as they had fished up and down the shore all night and caught nothing. They grumbled because this group were excellent fishermen. It’s what they had done for most of their life. These were experts who knew how to catch fish from a boat, using nets to bring in large quantities of fish. No fish for them was unheard of. The man on the shore shouted to them, “Haven’t you any fish?” and they shook their heads and said, “No”. He then said to them, “Throw your nets on the right side of the boat and you’ll find some.”

You would expect their answer would be one I’ve heard countless times in my career,

Ever said that to someone who offered a suggestion to you or your team? Chances are you have. It’s a normal response. That phrase isn’t an explanation, it’s a defense and resistance. It means “we know what we’re doing (we aren’t stupid), it didn’t work when we tried it before and, so no, we don’t want to do it again.”

That response is one of the two phrases most often said by staff in organizations around the country, right next to “we’ve always done it that way.”

But that isn’t what these fishermen did. Instead, they threw their nets on the right side and caught an overwhelming number of fish. Success beyond their imagination.

Does that story sound familiar to you? It’s from scripture, John 21, and the disciples hauled in an amazing catch, before recognizing the man on shore was Jesus. I’m not totally certain why this story is included in the Bible, but since scripture is our guidebook, there must be a lesson in it.

I believe the lesson is before we resist an idea we’ve tried before, we need to evaluate whether the circumstances have, or could have changed?

Why would you even consider that circumstances may have changed? Because life is constantly changing, it’s never the same, therefore circumstances do change. Whatever the circumstances were whenever you tried it before, they are not the same as they are today.

We also underestimate the impact of timing as a key element in success. When successful, we assume it was our brilliance, after all we had a great idea, and our execution was spectacular. I agree that’s certainly possible, but it also could have been the timing just happened to be right.

Timing is tricky. If you are too early, you will fail. If you wait too long, you will fail. You need to be at the right time. What failed the first time may have been a great idea, but too early, and trying it again, might be wildly successful.

Sometimes an old idea needs a little “twist”, some slight changes or modifications could be all that is needed to make it successful.

He called out to them, “Friends, haven’t you any fish?” “No,” they answered. He said, “Throw your net on the right side of the boat and you will find some.” When they did, they were unable to haul the net in because of the large number of fish. John 21:5-6