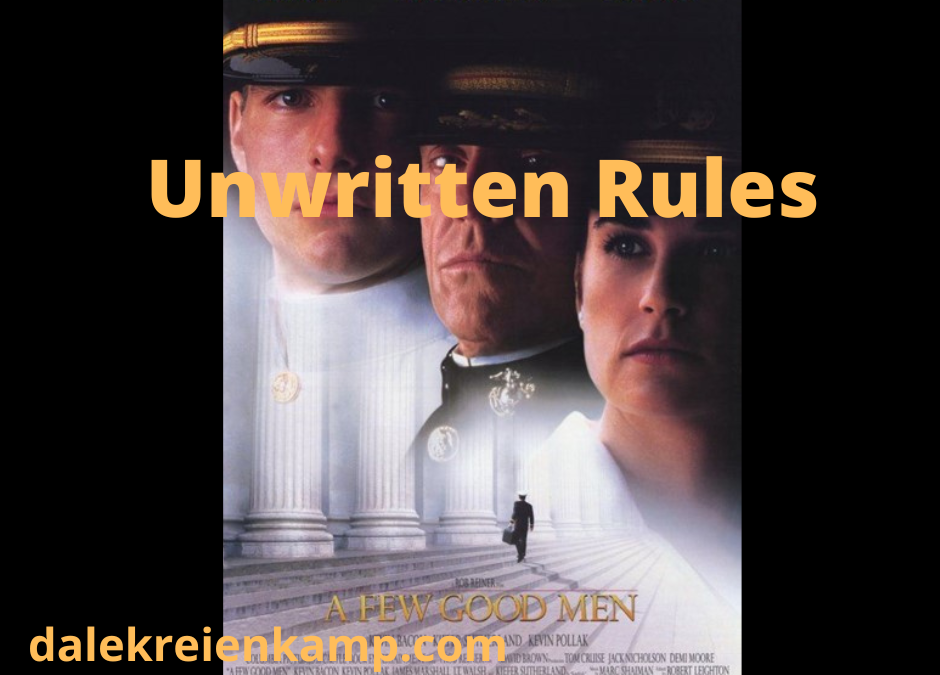 It’s one of my favorite scenes from the movie “A Few Good Men”, taking place in a courtroom, the examination and cross examination of Noah Wyle’s character (Corporal Barnes) about the existence of a “code red”, where the team take discipline into their hands. Through the testimony, Tom Cruise’ character (Lieutenant Kaffee) tries to prove such an order exists and Kevin Bacon’s character (Captain Ross) argues it doesn’t exist. The key exchange happens when Captain Ross produces both the “Marine Outline for Recruit Training” and the “Standard Operating Procedure Rifle Security Company – Guantanamo Bay Cuba” manual to support his questioning. When the answer is that it isn’t in the manual, he asks a key question:

Captain Ross:         Is there no book, no manual, no pamphlet, no set of order or regulations to let me know as a Marine one of my duties is to perform code reds?

Lieutenant Kaffee:  Corporal, would you please turn to the page that tells you where the mess hall is? Have you never had a meal?

The point made is clear, not everything is written down, unwritten rules exist.

Are unwritten rules good or bad? It usually depends on your perspective.

Organizational veterans don’t always like written rules because they get in the way. They know how things work, what’s expected and prefer some flexibility, the ability to bend those rules just a little.

New people in an organization or new department tend to prefer written rules. They like a “rule book” that tells what is acceptable and not acceptable. People want their actions to be normalized. No one wants to admit it, because we celebrate individuality, but we’re all trying to fit in, which is easier to do if you follow the rules.

Maybe it’s never happened in your organization, but over the years I’ve found that sometimes certain written rules aren’t followed, so the unwritten rule has become don’t follow the written rule. That’s simple, isn’t it?

Someone will always violate the rules because they are human. The real question is whether they are held accountable?  When rules aren’t enforced, the standard changes to an unwritten rule. That becomes frustrating for those who follow the rules. It’s also frustrating for new leaders who want to manage according to what the organization says are written rules, only to find out they aren’t followed. They usually find out when holding their staff accountable and being told no one else is.

Can it be good not to have rules written down? Absolutely, it’s called freedom. If there isn’t a rule against it, if what you want to do is reasonable you have the freedom to do it. That can be exciting.

I think sometimes unwritten rules can be constraining. One of the new changes happening in the workplace is organizations implementing unlimited vacation time benefits. The organization says, “we trust you to take what you need”. I believe it sounds good, but I’m guessing people will take less time off, because their peers will be watching. The unwritten rules about how much time off you can really take won’t be unlimited.

“You’ll never be wrong for doing what is right.”

Keep doing what is right, whether it’s written or not.