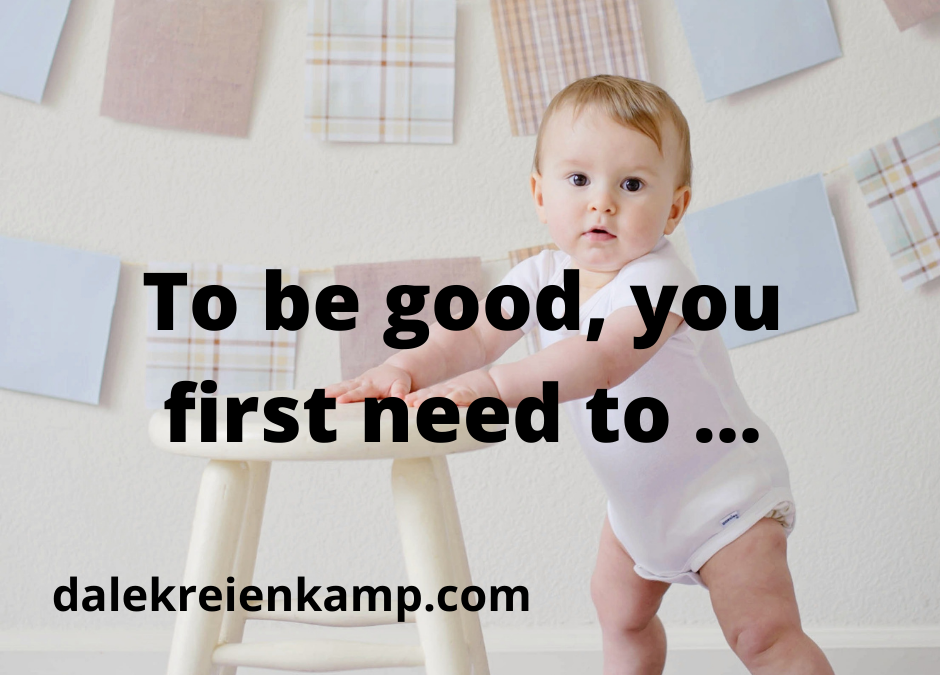 To be good, you first need to …

The boys were about seven years old, the first year of playing organized baseball. The coaches, who were fathers of the boys, were paired off with one or two boys playing catch and doing their best to hit the glove. Boys at that age aren’t good at catching the ball, it’s a learning process. The ball was coming toward Andrew, thrown by his own father, he put his glove above his head to catch it, but the ball didn’t hit his glove, it hit him on the nose. Blood was everywhere, tears of course followed because a baseball on the nose hurts. We learned the next day the result of that missed catch wasn’t just a bloody nose; it was a broken nose.

Andrew learned in a painful way, that he wasn’t yet very good at catching a baseball. Along the way there would be more misses and drops, but in staying with it, he became a good baseball player. That lesson is a hard one, but it’s a universal law of the universe and as we get older, we like it even less.

To be good, you first need to fail.

Maybe you don’t like the word fail, okay, change it to “awful”, “suck at it”, or whatever you prefer.

A baby learning to walk is full of tumbles, falls, wobbly steps, and tears.

Learning to ride a bike without training wheels, is an experience of scraped knees.

Learning to play basketball has plenty of missed shots, balls dribbled off a foot and even running the wrong way on the court.

I doubt you aced your first spelling test.

I don’t believe you can come up with anything you do well today that you didn’t first fail at.

If you want to be good at your job and successful in your career, you need to work through and get past your failures.

It’s not easy, I know. Yes, failure is sometimes embarrassing. You feel like everyone is watching you saying to themselves “I could have done better.” You feel incompetent. It causes you second guess yourself. I know because I’ve had those feelings plenty of times in my life, and I don’t like any of them.

You have a choice of two paths.

Avoidance – Stay away from anything you aren’t good at. Quit any job that makes you do things you can’t do. Don’t take risks, only do something that is 100% guaranteed to be successful. Or, if it looks like you might have failed at something, blame someone else. Blame a person or even a department. When you do, you can continue to believe you haven’t failed because after all, it’s not your fault, it’s theirs. Avoidance is limiting for yourself and you will run out of options.

Get better – It starts with accepting responsibility for the failure, then work hard to get better. That doesn’t mean you won’t fail again, but the more often you do it, the better you will get at it. As an example, if you don’t speak well in public, find opportunities to speak more often, join Toastmasters or somewhere you can practice. Ask for feedback from others regarding what you can or should do better. Ask for help, not letting your pride get in the way.

A bonus for you in working through failures is you’ll learn more about yourself and find you can do things you never imagined.

No matter how often honest people fall, they always get up again; but disaster destroys the wicked. Proverbs 24:16 (GNT)