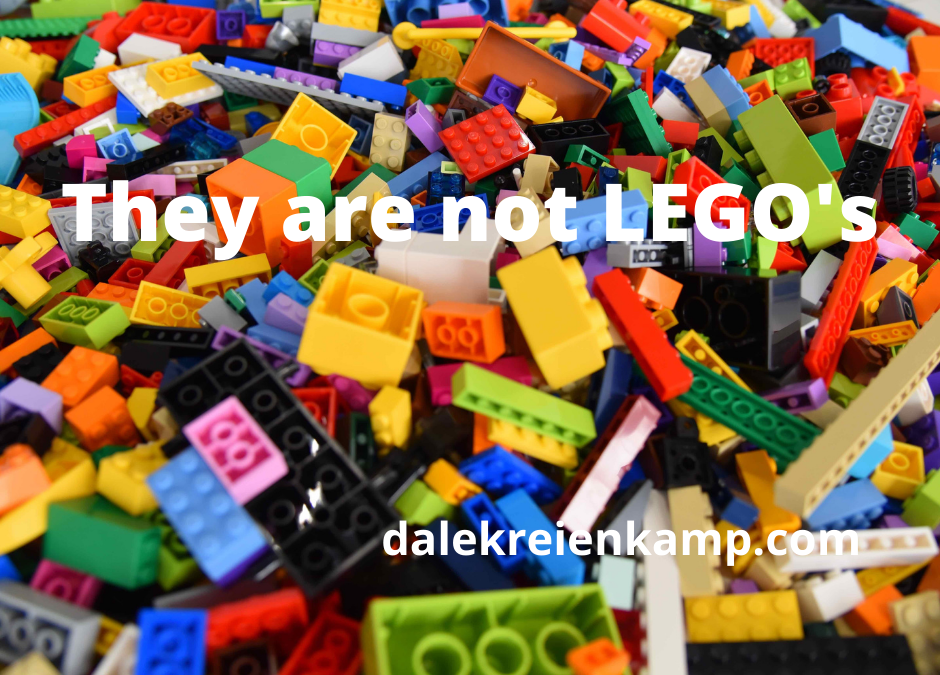 They are not LEGO’s

Is there anything better than getting down on the floor with your children or grandchildren, or even just by yourself, and playing with LEGO’s? I don’t think so. They appeal to everyone, those who are creative and even those of us who aren’t. LEGO’s come in many shapes, sizes, and colors. In the world of LEGO’s, each piece functions the same way, no matter what you are building. You mix and match different sizes and colors as you create your own masterpiece, your own design. When you are finished creating something with LEGO’s, we usually admire it for a moment, and then begin pulling pieces from what we just built to build something else.

If you are an organizational leader, your staff are the foundation, the building blocks for your success. Whether your organization makes a product or provides a service, it can’t be done without people. Yet people can be frustrating. Wouldn’t you love a staff full of LEGO’s? Think about it, you could re-arrange them in whatever way you wanted, and they would function just as they were designed. No complaints, no missed workdays or turnover. Just un-plug the employee you think will match a need and move them. No fuss, no worries.

While you might wish for a staff full of LEGO’s, remember each person comes with their own unique:

Beyond these differences, others have even more peculiarities that are difficult to understand, like being a Chicago Cub’s fan. Sorry, as a St. Louis Cardinal’s fan, I couldn’t resist it.

Yet with this knowledge, leaders will inevitably make decisions without considering or caring about the impact on them, or even speaking with them before making the decision. Since it makes sense to that leader, it fits into their plans, it should make sense to the employee.  Right? Those leaders treat their staff as if they were a LEGO ®. And then, they are surprised when things don’t work as planned, staff complain or there is turnover.

The best leaders don’t avoid tough decisions but put people first in the process. They don’t just use the right words; their actions show they care. They know their financial position reflects what is going on with their employees. Put your people first and remember they are not LEGO’s.

We have many parts in the one body, and all these parts have different functions. Romans 12:4 (GNT)