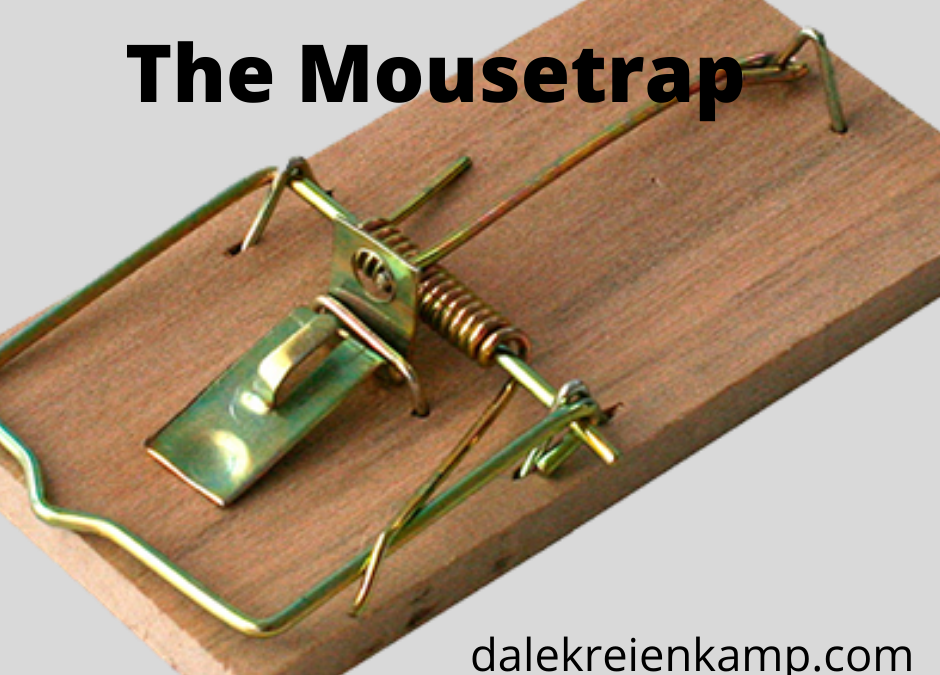 The mouse saw the truck deliver a package to the farmer’s home and wondered what was in it, hoping it was food. When the farmer’s wife opened it, he was aghast.

It was a mousetrap!

The mouse was afraid and went to others for help. First, he ran and told the chicken there was now a mouse trap in the house. The chicken replied, “it’s of grave concern to you, but it’s of no consequence to me. I cannot be bothered by it.”

The mouse was disappointed in the response, and went to see the pig, telling them there’s a mouse trap in the house. The pig sympathized and said, “you’ll be in my prayers but there’s nothing I can do.”

The mouse’s last hope was the cow, who sadly for him responded with “it’s no skin off my nose.”

The dejected mouse felt all alone in facing the farmer’s mousetrap.

That night the farmer’s wife heard the trap spring and early in the morning found it was a snake’s tail. She got too close and was bitten by the poisonous snake.

The farmer rushed her to the town doctor who did all he could and sent her home with a fever. The doctor told him that chicken soup would be good for her. So, the farmer went and got the chicken, cut off its head and made chicken soup.

The wife’s sickness continued. Friends and neighbors came to watch her so that he could tend to his crops. He wanted to feed them while they helped his wife, so he took his pig slaughtered it to have food to feed them.

After a period of her continued illness, the farmer’s wife died. Following her funeral, he hosted a gathering and wanted feed everyone. So, he took the cow and slaughtered it to provide a feast.

What should you be learning? When there’s a problem and you think it’s not your problem or doesn’t impact you, think again.

I find today that we all are challenged with believing too many things don’t impact us, when they really do. We are all related, so my problem is your problem too, we need to care. And, what do we do about it? What is our responsibility to help fix it instead of blaming someone?

Here’s a very short list or problems I see, and unfortunately don’t have an answer for.

I can share more, but you get what I’m talking about. You can create your own list.

I believe we need to acknowledge the problems and challenges of this life and their impact on others. None of us can fix everything, but we can each find ways to help make a difference.

Share each other’s burdens, and in this way obey the law of Christ. If you think you are too important to help someone, you are only fooling yourself. You are not that important. Galatians 6:2-3 (NLT)