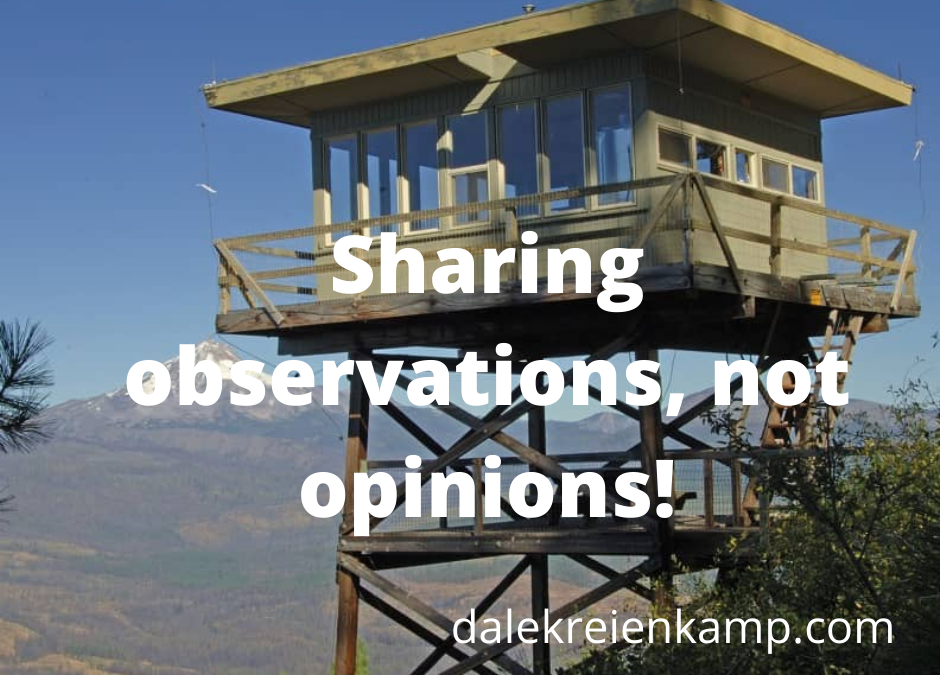 I wish I had learned this bit of wisdom when I was younger. It would have made me a better leader, a better friend and saved me from damaged relationships.

I learned this from my friend Robert, who isn’t from around here, and that doesn’t mean another state, he’s from another country. What he offered was a new perspective for me.

I had asked Robert what he thought about something, but instead of telling me, he told me he has learned that in our culture, it is safer to respond with what he has observed, instead of what he thinks. Then he told me what he observed. In sharing those observations, he let me be the person who interpreted the data he provided with his observations.

What an eye-opening lesson for me and one I hope to utilize, and I hope you will too.

When we share what we think, me included, we like to believe we’re sharing facts, but it’s really our opinion, which we’ve slanted based on how we see things. Sharing our opinions makes us feel smarter and we’re usually eager to share our wisdom with others, whether they want to know it or not.

When you tell someone what you think about something, you’re setting yourself up in a position of judgement because you’re telling them the answer.

After hearing what someone thinks, there tend to be three reactions or responses.

As a leader, you will often be asked what you think about things like plans, goals, and people. If you want others to hear you and consider your words, be careful how you respond.

Here are two examples using the perspective of saying what you think (your opinion) and what you observe.

What do you think about our marketing plan?

Opinion: “I think it’s weak, the assumptions are too dated and there isn’t enough emphasis on the new customers we are trying to reach.”

Observation: “My observations are the assumptions appear to focus more on what has worked historically in our industry, and there appears to be less of an emphasis on reaching new customers.”

What do you think about Maria, the new Vice President of Marketing?

Opinion: “I think she doesn’t know our industry, which is why her new ideas won’t work in this industry.

Observation: “My observations are that she’s still learning our industry, and if she knew more about it, she might re-think or modify some of her new ideas in order to make them successful in this industry.”

The same information is being shared, but did you notice the difference in tone of when sharing observations instead of an opinion?

Using observations can be an excellent method to share information that needs to be heard, but in a less critical and judgmental way. In doing so, the receiver is more likely to be open to re-considering, instead of digging in and being defensive.

Put observation sharing in your leadership tool kit and use them to get your message heard and received.

Fools have no interest in understanding; they only want to air their own opinions. Proverbs 18:2 NLT