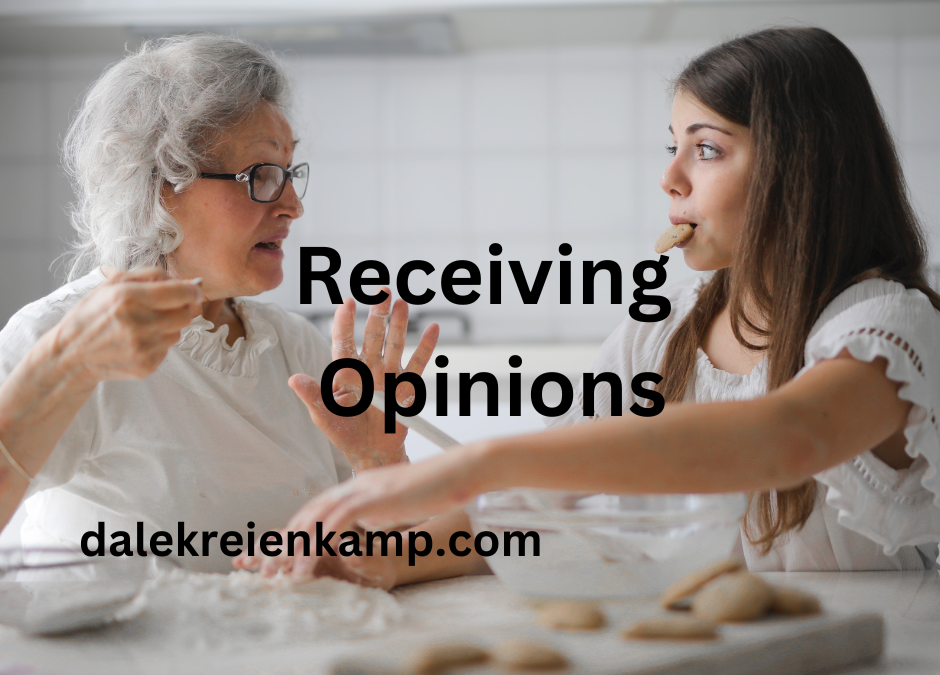 Is there anyone today who doesn’t have an opinion about everything? I’d like to meet them. I find everyone has an opinion and they are more than willing to express it. There’s no shortage of opinions whether it’s in our personal life or where we work. Sometimes, the person shares their opinion confidently because they have knowledge or experiences that have shaped their thoughts. Sadly, some share just as confidently their opinions based only on what they’ve “heard” and even more troubling is they never checked out if it’s true.

When opinions are shared, I’m confident they aren’t doing it to cause harm. Most people share because they believe their knowledge might help someone avoid a mistake, not miss an opportunity, or be enlightened about something they believe is important. Their intent is good.

It could be their delivery, you know, the tone of how it’s said, the “air of superiority” of the person sharing it. It’s not what they said, but how they said it.

Or we can blame ourselves because we aren’t good at simply receiving what others have to say. Since you and I can’t control what someone else will say, our focus needs to be on how we receive opinions and our response.

I wish I was better in practice doing what I’ve learned from others about receiving opinions from others, but it’s hard. If it was easy, everyone would do it.

I recall a radio interview with Don Drysdale, the late, great baseball pitcher for the Los Angeles Dodgers, talking about what he learned from his pitching teammate, Sandy Kofax. Drysdale told a story of watching people stop Sandy Kofax and share their opinions about what he should or shouldn’t be doing. He asked Sandy why he listened to them? He said Sandy just smiled and told him something like,

“Don, I learned that it’s best to listen, smile, thank them for sharing and then decide later if what they shared is something I needed to receive or ignore.”

Tip # 1 – Be gracious in receiving, but remember you determine the value of the opinion. Just because someone chooses to share their opinion doesn’t mean it is important for you. It could be the opinion is extremely valuable. I think more often it’s just one person’s belief about something that doesn’t have any value. If there isn’t any real value to you, It’s not worth fighting or arguing about because rarely will either of you change your opinion.

Another person I listened to in my career was John, our hospital’s Executive VP of Finance. I remember him telling a story of a friend asking John how he could possibly stand working with Physicians as John did, because of their egos. John’s simple response was,

“We get along fine because I take everything they tell me seriously, and I take nothing they say personally.”

Tip # 2 – Don’t take it personally. You don’t need to let someone hurt you with their opinion just because it doesn’t match yours, or how they say it. It’s not worth it, it’s just an opinion, let it go.

You’ll never stop people from sharing, it’s what we do. But you do control how you receive what is shared and how you respond.

The more you talk, the more likely you are to sin. If you are wise, you will keep quiet. Proverbs 10:19 (GNT)