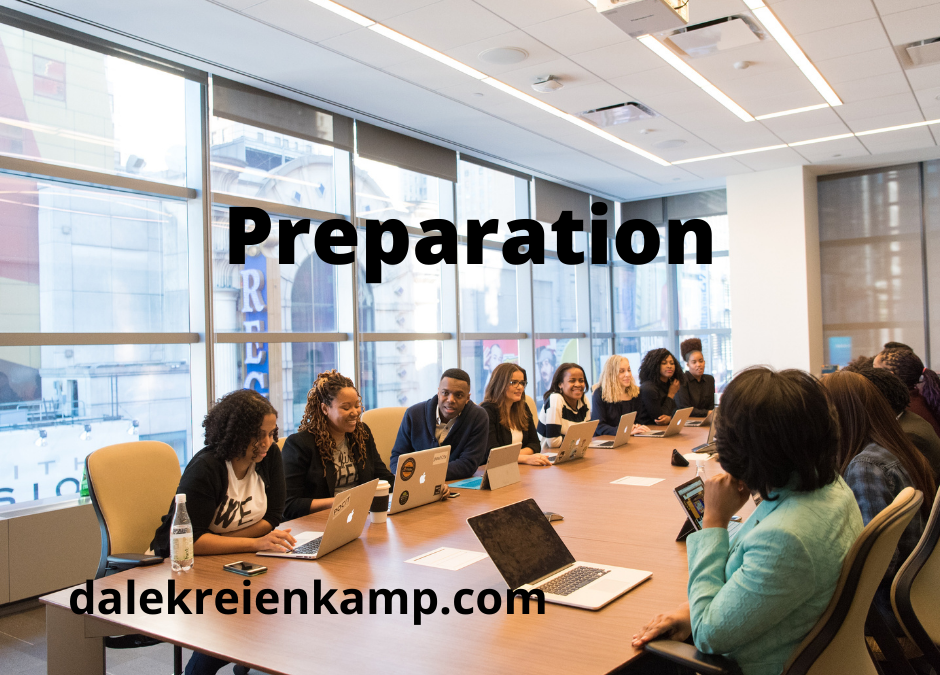 It was another Monday morning meeting. Yuk! Taylor dreaded going to it as he did every week. He didn’t like meetings to begin with and he believed nothing was ever accomplished at this meeting. He printed off the agenda, never looking to see what was going to be discussed, grabbed a few things, and began walking to where the meeting was being held. He was late but thought nothing of it because this meeting rarely started on time. Taylor walked into the meeting and was surprised to see Stephanie Hart, the head of the division he worked in, was present at the meeting. He noticed she was focused on him as he sat down and seemed to take note of who he was, which wasn’t a good thing. He pulled out his agenda and noticed it said she’d be present to talk about new ideas for the coming year. A few minutes later, he was asked to offer his opinion on something and to share his new ideas. He was screwed, he wasn’t prepared.

Has that happened to you? A meeting you thought you could just “wing it” through, ended up being something different because you weren’t ready. Being prepared is your responsibility, in all aspects of your job. Let’s focus on meeting preparations.

The reason meetings aren’t productive isn’t the fault of the meeting or the topic, it’s because the leader and/or attendees aren’t prepared. Too often we don’t take meetings seriously, which causes them to be a waste of time. It happens large and small businesses, non-profits and even churches. They all waste time with meetings.

Good meetings begin with leadership. I’m not perfect, I confess I’ve been both part of the problem and solution at times in my career, as a leader and an attendee. What can you do?

If you are the leader, it begins with your preparation. Focus on these three.

If you are attending a meeting, focus your preparation on these three.

Being prepared will set you apart from others.

Always be prepared to give an answer to everyone who asks you to give the reason for the hope that you have. 1 Peter 3:15