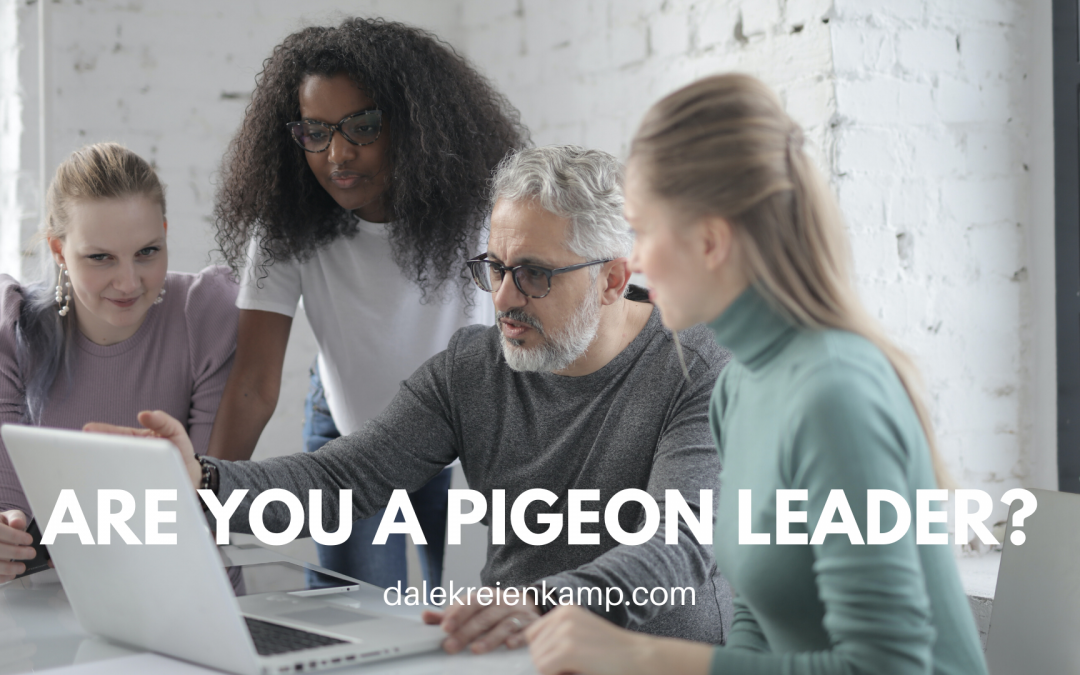 Are You a Pigeon Leader?

Once, I had a great conversation with several leaders about leadership styles—both good and bad. Everyone had something to contribute. The one I remember most was the person who talked about a leader who practiced Pigeon Management.

This person said, “We think everything is going well. Then, all of a sudden, our manager flies in and, like a Pigeon, sh*ts all over everything. After that, he flies away, leaving us to clean up the mess!”

We all laughed. Many of us had similar experiences with leaders in the past. But in that laughter, we recognized that each of us could become a Pigeon Leader if we’re not careful.

Here are three ways to ensure you don’t become a Pigeon Leader.

When you climb the ladder into leadership, unless you are a working supervisor, your value does not come from “doing.” It comes from leading and directing the work of others.

Can you imagine how awkward it would be if the conductor of a symphony orchestra tried to conduct while playing several of the instruments? It wouldn’t work well. But that is what often happens when a Pigeon Leader involves themself in the middle of their team’s work.

The Pigeon Leader has trouble accepting their role when they either (1) need to control everything, or (2) have a need to be needed.

When those who need control feel like they’re losing control, they want to get into the mix and grab some of it back.

Those who need to be needed have a self-worth issue. Unconsciously, the leader feels if no one requires their assistance, they don’t have value. So, they swoop in and get into the mix, which makes them feel needed.

Regardless of the reason, it doesn’t work, they disrespect their team and they can cause significant damage to their team’s morale and progress.

2. Be Clear with Expectations

When leaders are good at setting expectations and holding their team accountable, they increase their chance for success.

But Pigeon Leaders struggle to set clear expectations. Of those I worked with over the years, they often have one of three problems:

They cannot describe what they want. Instead, they can only react to what they see and don’t like.

They know what they want, but struggle to express it.

They agree to a specific set of parameters, but their “yes” didn’t really mean “yes.” They wanted to say “no” or wanted something different, but for some reason, they felt they couldn’t.

If you set clear expectations, you shouldn’t need to get involved in the middle of the process.

3. Put Yourself in Their Shoes

Before you swoop in and get involved, imagine what it would be like if someone did the same to you.

My dad used to say, “Look before you leap” all the time, and it’s applicable here. Put yourself in their shoes before you get involved.

If you are a leader, it’s okay to visit the team. But, visit like the pigeon who flies in, observes quietly, asks a few questions, and affirms the team. That would be preferable to flying around, leaving droppings everywhere!