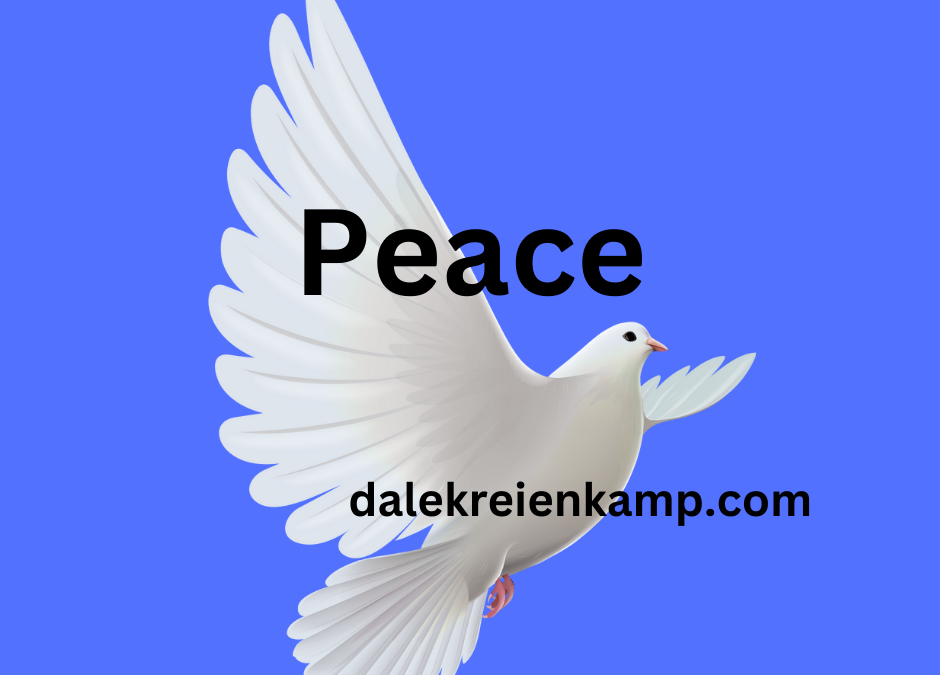 Are you struggling today? Overwhelmed and uncertain of the future? Do you wish you were at peace?

You aren’t alone. Too often our struggles come because we are trying to fix it ourselves, we want control. But we can’t do it ourselves, it’s not working and because of that, the world feels out of control. There is a solution, but it requires giving up control.

Think about the forecasts made by you or those in the organization where you work about the future. Investors love to see a 1-year plan, 3-year plan and even a 5-year plan. Do they happen 100% as predicted? Chances are they don’t. What about 75%? 50%? When things don’t go as planned, do you have more peace, or less peace?

Jesus’ birth was forecasted hundreds of years in advance.

“But you, Bethlehem Ephrathah, though you are small among the clans of Judah, out of you will come for me one who will be ruler over Israel, whose origins are from of old, from ancient times.” Micah (750-686 BC) 5:2

Therefore the Lord himself will give you a sign: The virgin will conceive and give birth to a son, and will call him Immanuel. Isaiah (745-727 BC) 7:14

Unlike our forecasting, this plan happened as predicted.

Making predictions and planning are much easier than trying to execute a plan to perfection. Do you know the many things that needed to come together to fulfill God’s plan for the birth of his son?

To fulfill the prophecy in Isaiah, God chose Mary, a virgin who was engaged to be married to Joseph and sent an angel to deliver the news. (Luke 1:26-37) In Mary’s questioning the Angel of how this was possible, the angel responds to Mary that,

What does that verse mean for you and me?

When Joseph learned Mary was pregnant, and not by him, he was hurt and planned to quietly divorce her. But God wanted Joseph to be part of his plan, turnover wasn’t an option, so he sent an angel to Joseph to change his plans. (Matthew 1:18-21)

Joseph and Mary lived in Nazareth, so how would the savior be born in Bethlehem? (Micah 5:2). They had no reason to go there, but God orchestrated a census through the Roman governor, which required them to go to where Joseph’s family was from.

And guess what? His family was from Bethlehem!

Since they didn’t have the radio, TV, newspapers, or social media to get the word out, the decree may have even been written before Jesus was conceived. It took time.

In those days Caesar Augustus issued a decree that a census should be taken of the entire Roman world. Luke 2:1

Mary was pregnant, ready to deliver, and had to travel about 80 miles, walking or riding on a donkey to Bethlehem. Do you know how long the journey would take under those conditions? Whatever it was, they left at the right time, and she made it without delivering early.

We learn in the story that when they arrived in Bethlehem, it was time for Jesus to be born, and then he was placed in a manger because there wasn’t any place for them to stay, which means God needed to have all of the inns in town full when they arrived.

While they were there, the time came for the baby to be born, and she gave birth to her firstborn, a son. She wrapped him in cloths and placed him in a manger, because there was no guest room available for them. Luke 2:6-7.

Then came the announcement to the world from the angel and the heavenly hosts to a group of shepherds in the fields.

And there were shepherds living out in the fields nearby, keeping watch over their flocks at night. An angel of the Lord appeared to them, and the glory of the Lord shone around them, and they were terrified. But the angel said to them, “Do not be afraid. I bring you good news that will cause great joy for all the people. Today in the town of David a Savior has been born to you; he is the Messiah, the Lord. This will be a sign to you: You will find a baby wrapped in cloths and lying in a manger.” Suddenly a great company of the heavenly host appeared with the angel, praising God and saying, “Glory to God in the highest heaven, and on earth peace to those on whom his favor rests.” Luke 2:8-14

Think about what needed to happen for this announcement to be received. He orchestrated the weather making certain it was a peaceful night for the sheep, so they weren’t running everywhere and distracting the shepherds. When are weather predictions ever correct?

And God chose those shepherds for a purpose, knowing after hearing the news they would respond the way he wanted, i.e., curious to check it out and then running, and telling everyone that his son was born.

So they hurried off and found Mary and Joseph, and the baby, who was lying in the manger. When they had seen him, they spread the word concerning what had been told them about this child, and all who heard it were amazed at what the shepherds said to them. Luke 2: 16-18

The birth of Jesus happened as predicted, 100%!

If God can do all of this, bring all these things together at one time, in the place he predicted hundreds of years in advance, do you think he can handle whatever problem you are dealing with?

I believe he can. Give it over to him. Enjoy life!