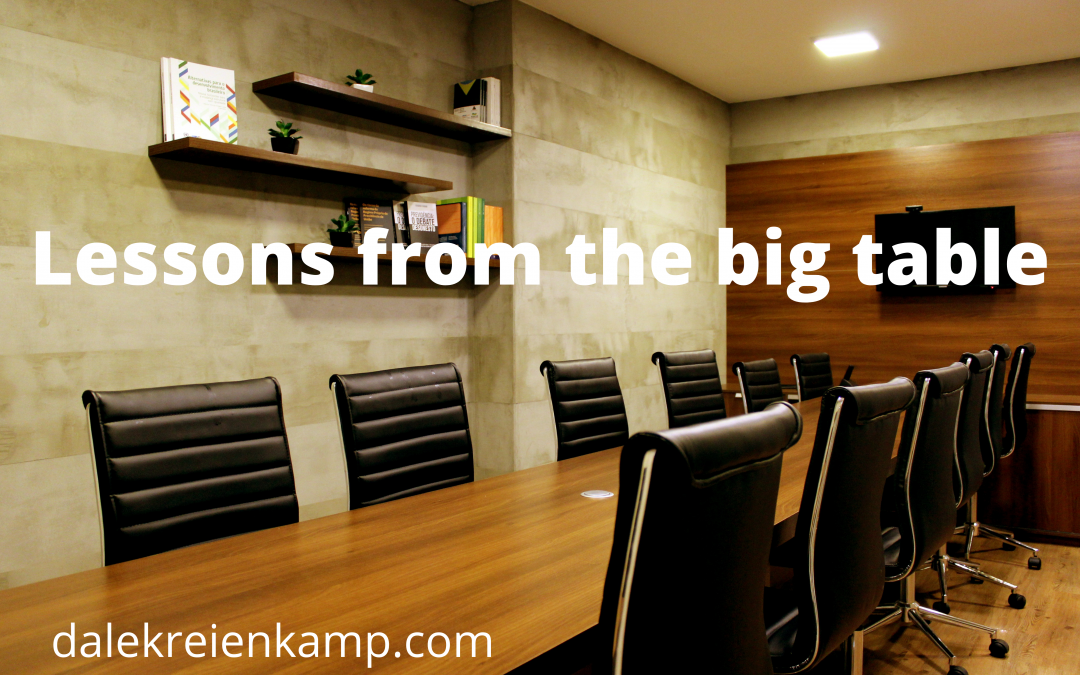 Lessons from the big table!

Early in my career, I had a chance to be a guest at “the big table”, i.e., the senior leadership table. I, like many, aspired someday to sit at that table, but on that day, I was a guest. I was there to present the options, costs, and the recommendations for changes to our employee health insurance for the coming year. I had received input from leaders on concerns and even met with the head of finance to double check the numbers, there was a cost to what we wanted to do, and I wanted to get his support. He was a mentor to me in my career, and he verified my numbers were good, indicated he was supportive and believed it was the right thing to do. I felt confident going into the meeting, not so good as the meeting went on.

After a discussion, our CEO asked each senior leader at the table to cast a vote and went around the table one at a time asking for their vote and why. To my surprise, the head of finance voted “no”. The recommendations failed. I left the meeting quiet, but furious inside.

Sometime later, after the meeting ended, there was a knock on my door and the head of finance came in to talk. He indicated he knew I was mad at him but he wanted to talk about the whole meeting, what I had witnessed and to help me understand what had transpired. He was doing for me what great mentors do, they help us to understand what might not be obvious. I learned several lessons from our conversation that were invaluable to me in my career.

What I wanted to know was why he voted “no”, after he had pledged his support. He acknowledged that he knew it made me mad, but wanted to talk about whole meeting, not just the vote. Thankfully, he was willing to talk first about the vote because he must have known I wouldn’t listen until we did. He first asked me to tell him where everyone in the meeting sat, and then asked me three questions:

I was able to answer his first two questions, highlighting how his leader had voted, which was “no.” In my anger, I hadn’t done the math, but now I had to acknowledge the answer to question 3 was his vote didn’t matter. Had he voted “yes”; it wouldn’t have changed the outcome.

He then asked me why should he vote against how his leader if it couldn’t make a difference? My idealistic answer was “to make a statement.” He shared that he could have done that, it wouldn’t be wrong, but he was looking beyond that vote (an important lesson).

He told me that for changes like those being proposed to succeed (which he believed in), would require the support of his leader. Disagreeing with him publicly with the vote, wasn’t the best way to get his support. It would be easier to gain support having conversations privately (another important lesson).

I’m thankful for his mentoring, it made me wiser. You and I need to do the same and mentor the next generation, teaching them what is important and maybe not always visible.