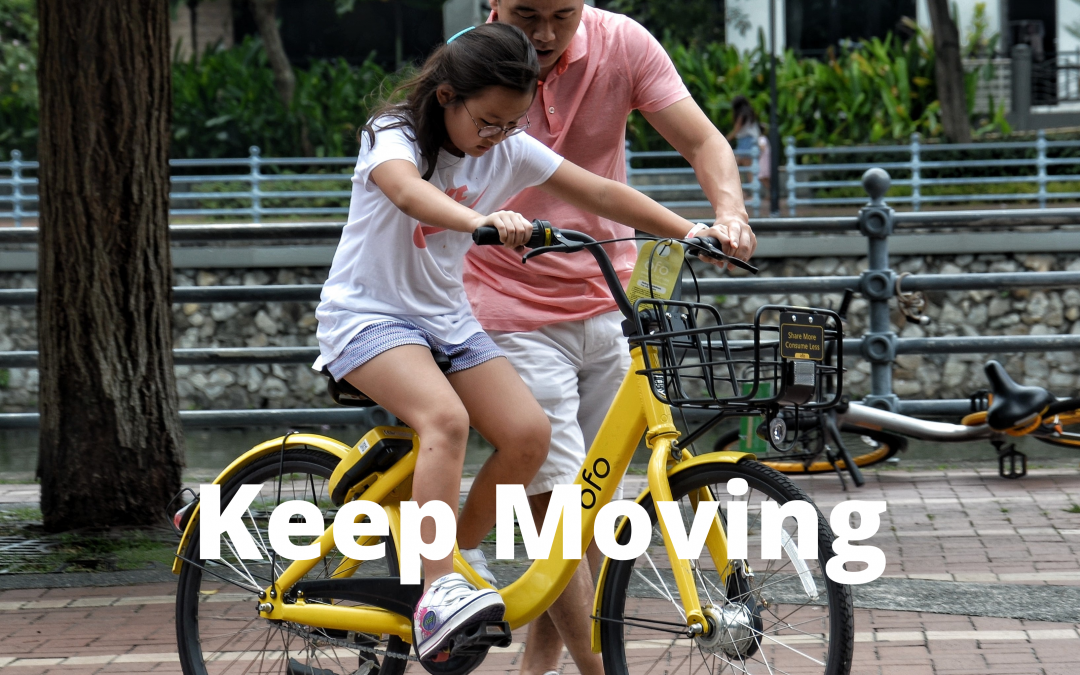 I remember it like it was yesterday, watching my son learning to ride his bike. He was my oldest.

The training wheels were now off. I gave the bike a push, he wobbled side to side, then he and the bike fell over. He was determined and wasn’t going to let that stop him, he got back up, ready to go again. This time, he gained a little speed, but he fell again. This happened a couple of more times. Finally, he got on the bike, but he didn’t want my push, and he started off on his own, again wobbling at first. Yet this time he kept going forward, gaining more speed, and with some speed, his balance improved, and soon he was riding a bike, all on his own.

Every child who has ever learned to ride a bicycle, has had to deal with the feeling of fear, of being out of control as they are gaining speed, even though the quicker they move forward and gain momentum, the sooner they will gain the balance they need to ride the bike.

“Life is like riding a bicycle. To keep your balance, you must keep moving.”

Oh, how true. Our fear of being out of control is what usually keeps us stuck where we don’t want to be. We over analyze all the direction possibilities, the risks with each, followed by our fears and insecurities. We keep looking for the “low risk” or “no risk” and what we get is “analysis paralysis”. Those fears keep us from doing anything, yet we’re miserable doing nothing.

Are you stuck now? It’s easy to be stuck and not realize it.

Follow Einstein’s advice, keep moving forward. Do something, don’t sit still. You need to move to gain some momentum.

It’s like the old cliché “A journey of a thousand miles begins with a single step.” Get ready for your journey.

First, pray to God for guidance and trust Him. Next, determine what the first step will be and take it.

God’s watching over you, waiting for you to “let go” of your insecurities and trust Him. He’ll be with you every step.

The steps of good men are directed by the Lord. He delights in each step they take. If they fall, it isn’t fatal, for the Lord holds them with his hand. Psalm 37:23-24 (TLB)

And just like riding a bike, it’s possible you may fall, but God will help pick you back up and re-direct you toward whatever is next.