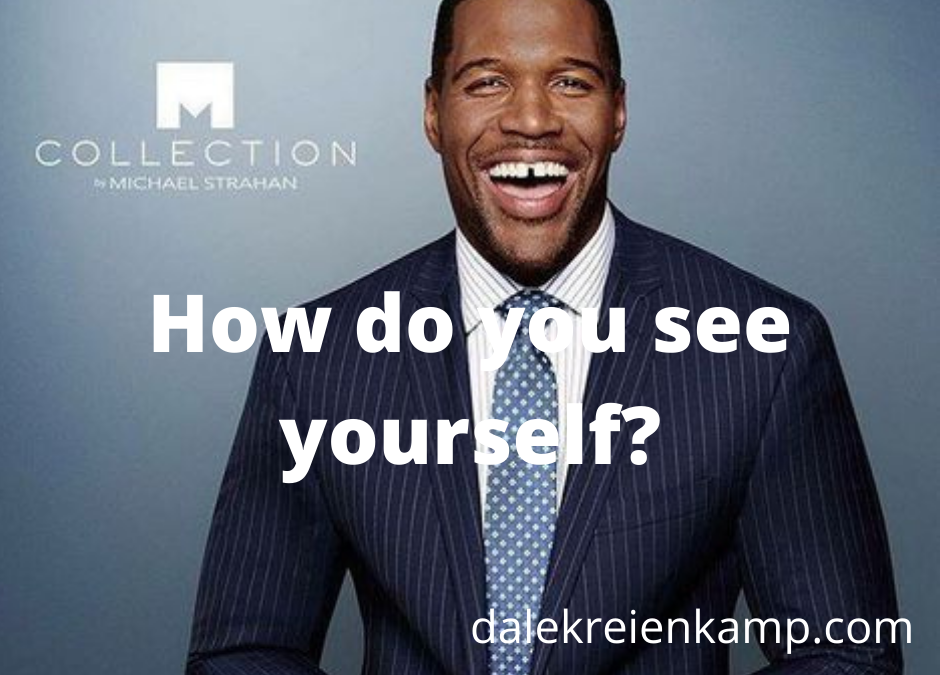 How do you see yourself?

Are you contemplating a change in your career? Maybe it’s a jump to a new industry a new position, a move into a leadership position, or going into business for yourself. Do you have some anxiousness about the jump? Do you wonder if you can you really do it? Welcome to the club, you aren’t alone. And it’s not just me with you.

Do you know Michael Strahan? What do you remember him for?

As one of the best defensive linemen in NFL history, pass rusher extraordinaire? He came out of Texas Southern to play for the New York Giants where he made 651 solo career tackles and had 141.5 sacks of the quarterback. He was elected to the Pro Football Hall of Fame in 2014.

As a football commentator? After retiring in 2008, he began working on Fox TV’s NFL Sunday program. That’s not an unheard of jump for a former football player, to go behind a microphone and share their knowledge about what they knew about football.

As a TV personality? This was a bigger and more difficult jump. After many guest appearances on Regis and Kelly Live, he replaced Regis in 2011, and the show became Kelly and Michel Live. In 2016, he began hosting Good Morning America.

Like all of us, Michael has fears and doubts, especially doing something new. Today you and I see the more developed Michael Strahan that was years in the making, but before he made those big jumps, he faced the same challenges.

I learned some important wisdom listening to Michael talk about his journey that’s applicable for you and me.

The first related to how we see ourselves. When any of us makes a move to something different, a question that nags at us is whether others will see us in the new role. As an example, if you make a move into leadership, you wonder if others will see you as a leader, instead of an individual contributor.

Michael, as talented as he is, wrestled with making a jump from talking about football to news and entertainment. It wasn’t his strength; he knew going into it that had a lot to learn and people would wonder why they chose him. When Michael spoke with someone he knew well and trusted about the move, they told him something he took to heart.

Others will only see you differently, or in a different way, if that’s how you see yourself.

Michael realized his self vision was important, he knew he needed to get past his self-doubts and believe in himself. He recognized something about doubts.

He’s right. We love to blame others or circumstances for holding us back, but that’s not what does. We are our own worst enemies. Doubt stops us from believing in ourselves, from making a big jump, from stepping into the unknown.

We also don’t believe God is there with us, but He is. After praying and seeking his guidance, trust him to equip you with what you need to be successful. Then watch how it works out for you and all that you can be that you never believed you could be.

Now may the God of peace, who through the blood of the eternal covenant brought back from the dead our Lord Jesus, that great Shepherd of the sheep, equip you with everything good for doing his will, and may he work in us what is pleasing to him, through Jesus Christ, to whom be glory for ever and ever. Hebrews 13: 20-21