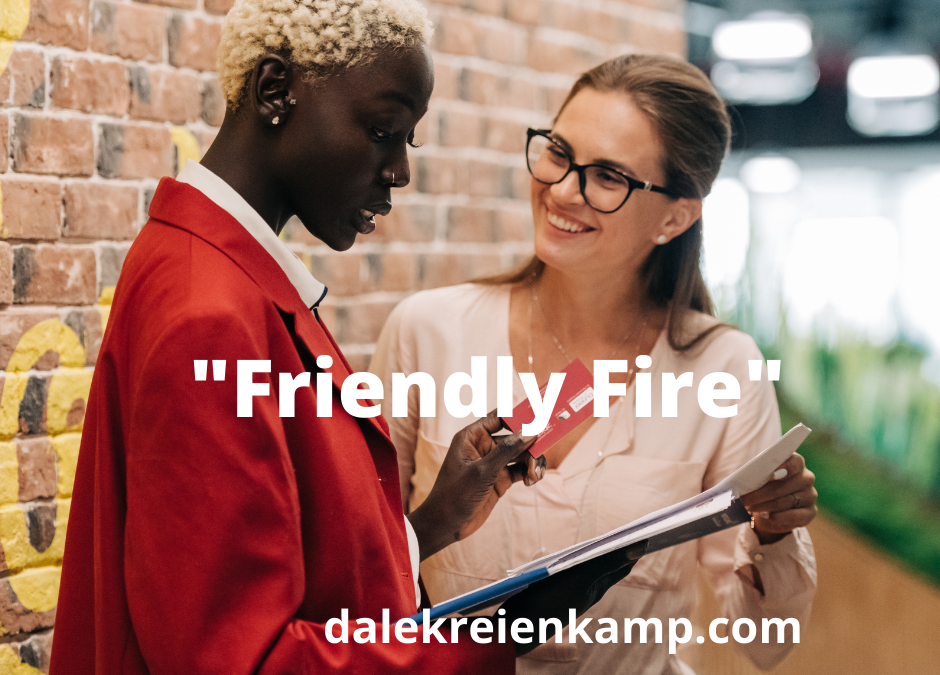 We often hear about friendly fire as it relates to military conflicts. When our troops were in Afghanistan, from time to time there would be a story of soldiers being killed by friendly fire. It has existed for as long as troops are fighting somewhere. Friendly fire is the accidental death or injury of someone on your side of the conflict.

If your job is not in the military or law enforcement where they use guns, you would hope you are safe from friendly fire. Unfortunately, I have found over the years that friendly fire exists in the workplace too.

Within organizations, we often hurt each other with words and stories. Does that surprise you? It should, because everyone at an organization is supposed to be on the same team, working together toward the same goals and seeking to accomplish the same thing. Where you work should be a place where working in harmony is the norm. Unfortunately, it is because organizations are full of humans. Everyone comes to work each day bringing their own, strengths, weaknesses, egos, competitive desires, and personal insecurities with them. Those human interactions all play out within the workplace. Friendly fire should always be unintentional. After all, who would ever want to hurt a teammate? While the answer should be “no one,” we often do hurt our teammates, and sometimes it’s intentional.

Over the years, I’ve seen two types of friendly fire in organization’s where I’ve worked. One is sharing rumors or stories about our co-workers, i.e., one person hears a story and chooses to share what they “heard” about another employee. Usually, it starts with, “I didn’t see this myself, but…,” and they add their own thoughts about it.

When you hear a story about someone else, leave it alone. Tell the person you don’t want to hear it and if they told you anyway, make the choice to forget you heard it. If you reshare the story to another co-worker because you thought it was interesting or it makes you feel superior, you’ve engaged in friendly fire. You hurt the person who the story is about, who has no way to defend themselves because they aren’t in the conversation. And I doubt you would want to have something said about you in the same way.

The other type are rumors, which are false, or half-truths being spread intentionally. It’s usually by a “bully”. While you hoped you were finished with bullies after high school, you are sadly wrong. Bullies hurt others because it makes them feel superior and as a defense, usually to their own insecurity.

Too often in society these days, people dwell on the negative (just watch the news) and choose to believe what they hear without fully understanding the whole story. Bullies can be successful when people are willing to listen and form the wrong opinion. Rumors and stories can damage lives. I’m embarrassed to say I’ve shared stories when I shouldn’t have and had stories shared about me that weren’t true. What about you?

As Thumper (from the Disney movie “Bambi”) always said, “If you can’t say something nice, don’t say nothing at all.” It’s good advice for all of us.

Do not let any unwholesome talk come out of your mouths, but only what is helpful for building others up according to their needs, that it may benefit those who listen. Ephesians 4:29