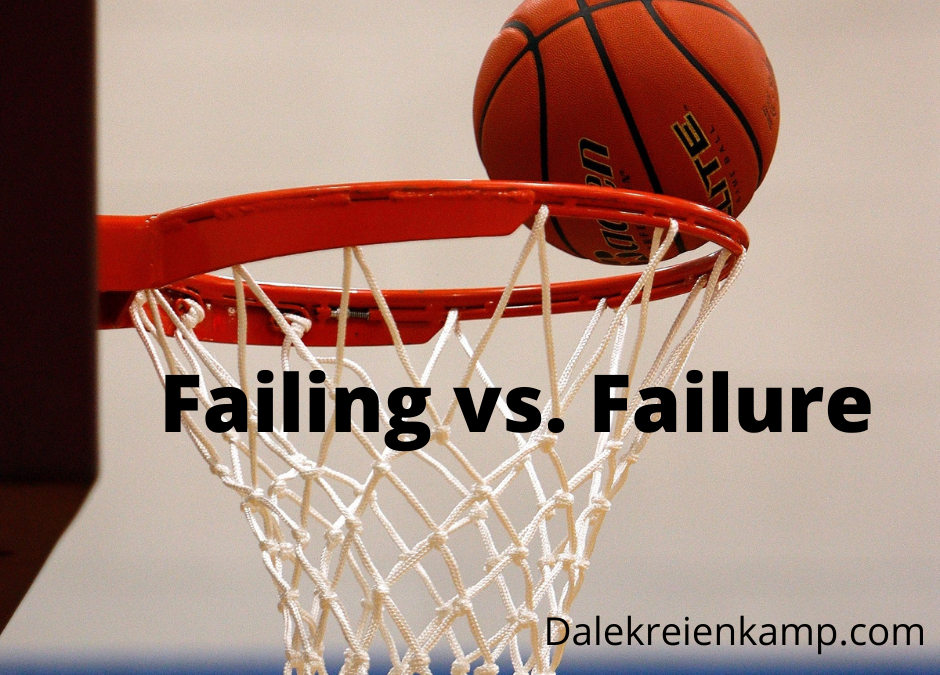 Michael Jordan has scored over 30 points in the game, yet the Bulls are down by a point. Michael has the basketball is in his hands, dribbling slowly as the seconds tick off the game clock. He knows he will take the last shot. At 10 seconds, he makes his move starting to his left, then slashing back to his right, leaving his defender off balance. With four seconds to go he rises and shoots a wide-open jump shot; it looks perfect as it floats through the air. As the ball arrives at the rim, it is less than an inch short of where it should be, hitting the front of the rim and bounces up, hanging there for what seems like an eternity, then falling only to hit the other side of the rim and fall off, not into the basket. The ball is rebounded by the other team. The horn sounds, the Bulls have lost. Michael Jordan missed, he failed.

I don’t know if you are like me, or maybe you are blessed to be different. I’ll confess if it was me who missed the last second shot and the game was lost; I would say to myself “I am a failure!” I would put the blame squarely on my shoulders and internalize it. I would forget the 30 points I had scored in the game and dwell on the end-result, that the game wasn’t won. And consider myself a “failure.” Michael Jordan doesn’t do that to himself.

My guess is, if you are honest with yourself, you’ve thought of yourself as a failure at times in your life. It’s pretty common. It usually happens when something doesn’t go the way we planned and it’s something we cared about.  It could be:

The challenge we face is that failing is part of life. It can’t be avoided, although we try. Some of us are “risk averse”, we avoid risks, trying to reduce the chance we will fail. “Helicopter” and “Snowplow” parents today are hovering over their children trying to keep them from feeling the pain of failure, which sadly doesn’t help them grow up.

Failing is part of the learning process of life, through it we learn and grow. Failing helps us get better. If you talk to anyone you believe has achieved success and ask how they did it, you’ll learn about their failures. My staff used to ask me why I always had so many questions of them when working on a project. My response was I had failed many times, and each time I learned what to ask to keep from failing in a similar way again.

Don’t dwell on when you failed, learn from it. Stop internalizing it, never consider yourself a “failure.”

Considering yourself a “failure” is a lie.  Satan uses it to keep us off our game. Don’t accept the lie. Failing doesn’t make you a failure, it’s an opportunity to learn and grow. You’ll come out better and stronger from navigating through times you have failed.

Dear brothers, is your life full of difficulties and temptations? Then be happy, for when the way is rough, your patience has a chance to grow.  So let it grow, and don’t try to squirm out of your problems. For when your patience is finally in full bloom, then you will be ready for anything, strong in character, full and complete. James 1:2-4 (TLB)