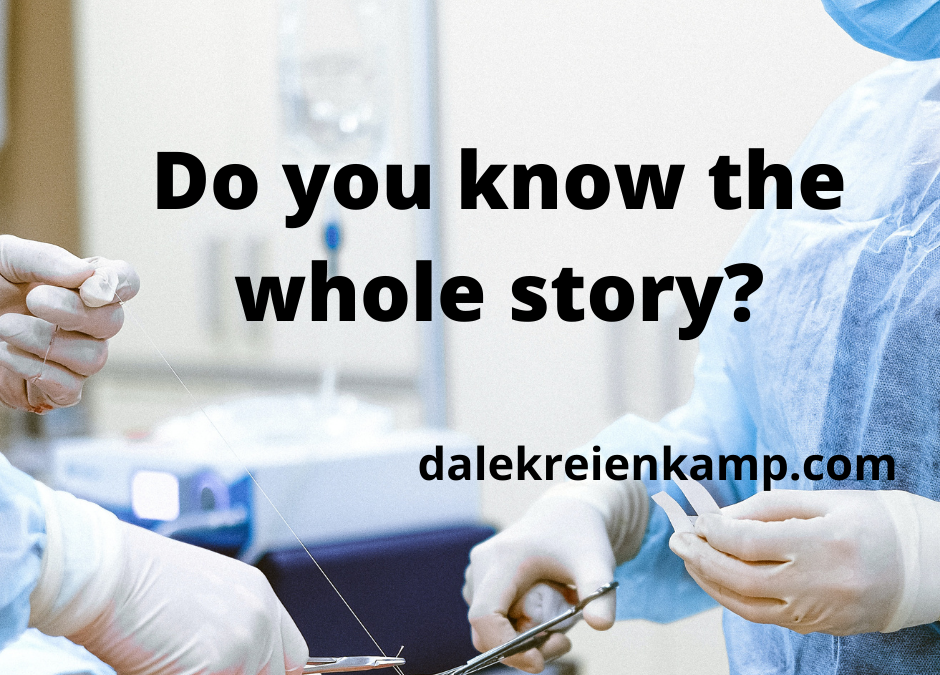 Do you know the whole story?

He was an unbelievably gifted heart surgeon. If it was a life-or-death situation, your chances of living were much better with him holding the scalpel. His technical skill wasn’t the issue we were meeting about, it to discuss the complaints from the heart team about how he treated them, especially how he spoke to them. He educated (lectured) me about the challenges a heart surgeon faces every time they are in the operating room, giving me a little glimpse into what he might be like. He voiced concern about staff competence and told me a story of a nurse who dropped a vein on the floor while transferring it from the patient’s leg, to be used in the heart surgery, and the complications it caused. When he was done, I pointed out that I was hearing a completely different story from him and the only way I would be able to judge was to view what was going on. So, I began watching heart surgeries to monitor his interactions with the staff. After watching my first heart surgery (an amazing experience), one of the nurses me and asked, “did he tell you the story about the vein?” I acknowledged that he had. She responded that the story of the vein being dropped was from seven years ago, and it had never happened since then.

I was surprised to learn the dropped vein happened so long ago because when I heard it, I assumed it was both a true story and recent. I began forming an opinion about the staff based on what he shared. After hearing from the nurse, I was disappointed in myself that I hadn’t asked for more information, and in the surgeon for sharing the story to mislead me. Sadly, it wasn’t the first time I had ever encountered something like that.

If we are honest, I believe we’ve all hung onto an opinion about someone which is based on an experience that happened a long time ago, or based on knowing only a part of the story. Sometimes we were only an observer of what happened, i.e., it didn’t impact us in any way, but we created an opinion based on a small glimpse. Other times, we have hung onto it because it harmed us in some way, or we felt let down.

These days, I don’t think we question enough. People are so easily offended and get defensive if you ask a question. Since most people don’t like conflict, they don’t ask. If they hear something about a person from someone who shares their views or perspectives, we assume what we’ve been told is true. It may be and it may not be.

When you hear a story like I heard, one that will cause you to form an opinion, do what I didn’t do, ask for more information in a gentle, curious way. Simply say something like, “that’s interesting, tell me more about what happened and when?”

You’ll learn more about what happened and the person who is sharing the information. Whatever opinion you form, will be based on the full story.