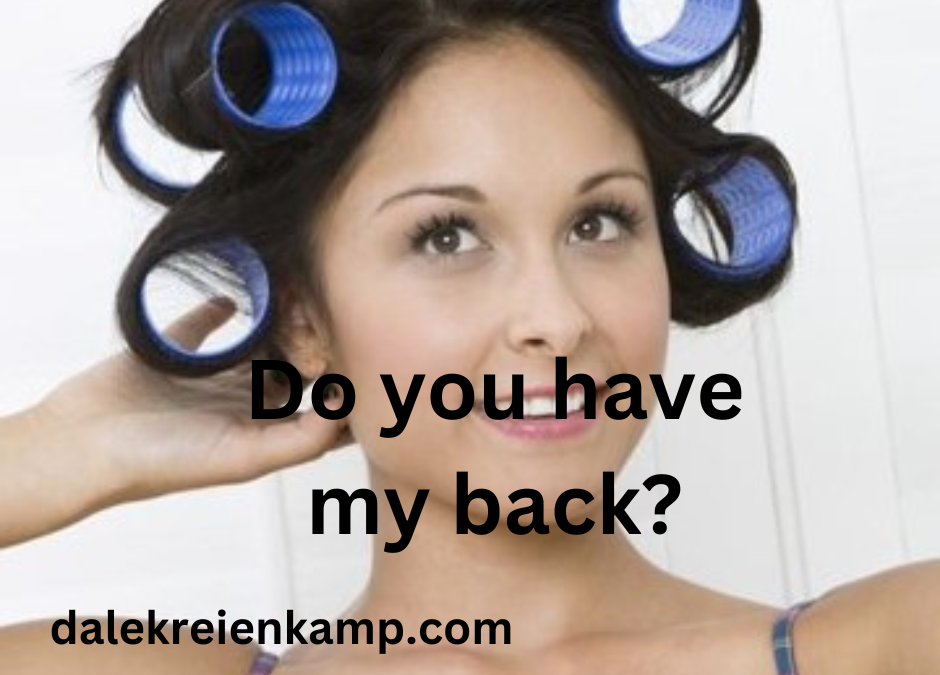 Do you have my back?

Mindy was anxious. As part of an organizational re-structuring, she and her staff had been moved to a new division, under a new Vice President. She would now be the only woman in a new team of all men. While that was a challenge, she was also grieving the team she left behind as part of the restructuring. It was a great team. They worked well together, supported each other and were friends. She was uncertain what the new team would be like.

As she prepared for her first meeting with her new teammates, her last step was putting 3 rollers into her hair strategically placing them in the back where she might have missed removing them if she had been in a rush. She was taking a big risk, but one she felt she needed to take that day. After a deep breath, she walked down to the meeting being held in a conference room with a glass wall allowing anyone passing by to see the participants. The meeting was a typical meeting, agenda items were covered, and every team member had a chance to talk about what they were working on. During the meeting Mindy could see her friends who as they walked by noticed the curlers in her hair. They were concerned for her having rollers in her hair when trying to make a good first impression with her new team, but they couldn’t seem to get her attention.

Finally, it was Mindy’s turn to speak in the meeting and after providing a few updates, she said she had a concern she wanted to talk about. She asked them a question, “Why has no one said something to me about 3 rollers in my hair that were clearly noticeable?” There was dead silence. “You did see them, didn’t you?” Yes, they all acknowledged they had. She then went on to explain what was most important to her. “If we are going to work together, I need to know we have each other’s backs. I need to know we will be honest, open, and truthful with each other, that you will tell me what I need to hear, even if I might not want to hear it or if it might be difficult to say.” Message delivered.

When I heard the story, I couldn’t stop laughing because I knew both Mindy and the friends who tried in vain to get her attention. When I stopped laughing, I was in awe of her clever way of dealing with a sensitive issue for a new team.

I’ve worked on some dysfunctional teams in my career and sadly what Mindy was seeking was missing. Everyone didn’t have each other’s back, nor were they honest. In fact, “yes didn’t mean yes”, it was just what they said to get on to the next topic. Teammates saw each other as competition for recognition or resources. Sometimes it was safer to sit with my back to a wall so no one could stick a knife in my back.

The best teams I ever worked with worked together, focusing on team or organizational goals. We had each other’s back, were honest and candid with each other. Another sign of a healthy team was always the existence of some victimless teasing or harmless pranks played on each other, and no one was offended. Ask yourself if there was ever teasing or humor on a dysfunctional team? I doubt it.

If you can’t be honest with everyone on your team today, take some time to ask yourself “why not” and then work to repair the relationship so that you can be honest. It’s a requirement of a great team.

Share each other’s troubles and problems, and so obey our Lord’s command. Galatians 6:2 (TLB)