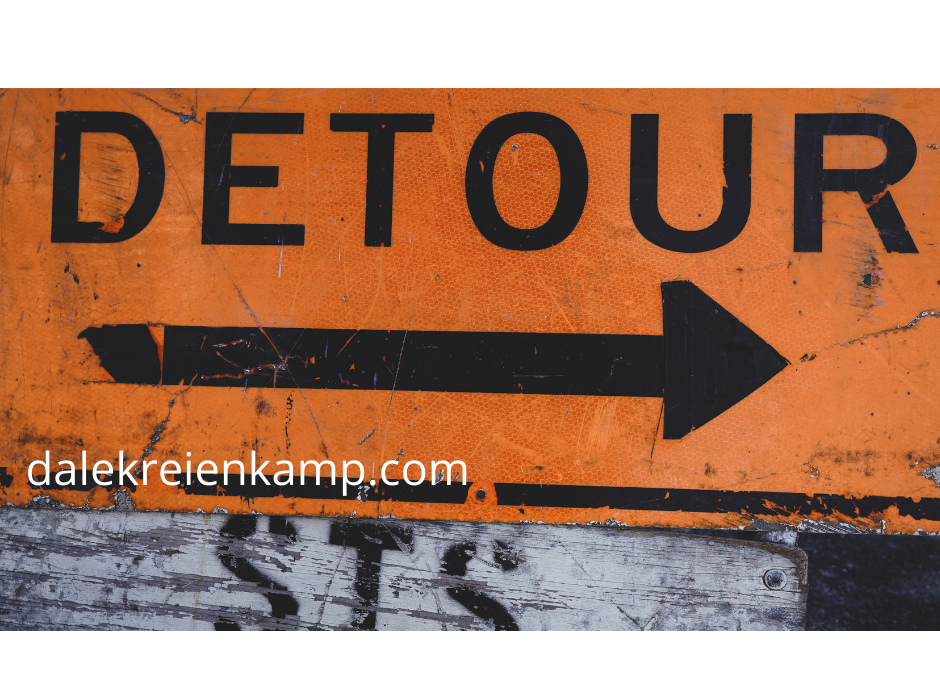 Deb and I were on our way to Florida in January, which is a good time to be leaving Missouri. It was cold, a light snow was falling and the roads in Kentucky were not fully cleared. Travel was slow and anxious. Our navigational app Waze, said to get off the highway at the next exit, but all traffic had slowed to a crawl and then to a complete stop. We couldn’t go anywhere. After an hour of waiting, cars begin to slowly move, and we finally  were able to exit. Waze said to go north, then sent us east, then south, then east again. We were moving, but we wondered when the detour we were on would end. Finally, we were sent north again and back to the interstate where traffic was flowing. Our detour had ended, we were on our way.

Most of us don’t like detours. While some might enjoy the unexpected scenery they get to see, I’m not one of them. I want a straight path to where I want to go.

But life, and our careers are rarely experienced without a detour or two, or three, or … Life isn’t as linear as we’d like to believe it is. We should expect the unexpected. Most of us will grumble when forced on a detour that isn’t leading where we want to go. Yet it is those detours which are often used to shape us, to prepare us for what is coming later in our life and our career. We just don’t realize the purpose of the detour when we’re on it and without the detour, we wouldn’t be ready for something that is yet to come.

A great example is when the Children of Israel left Egypt where they had been slaves, God didn’t choose the shortest path; he took them a roundabout path because he knew they weren’t ready and needed time to become ready.

So at last Pharaoh let the people go. God did not lead them through the land of the Philistines, although that was the most direct route from Egypt to the Promised Land. The reason was that God felt the people might become discouraged by having to fight their way through, even though they had left Egypt armed; he thought they might return to Egypt. Instead, God led them along a route through the Red Sea wilderness. Exodus 13: 17-18 (TLB)

That’s true for you and me. We don’t choose detours, they happen. If we had a choice, we would probably turn down or choose not to pursue opportunities because it wasn’t what we planned, or the move doesn’t give us enough responsibility, or avoid a manager level position in a larger organization because we see ourselves as a director level person, or…

In looking back on my career, my detours had a profound impact on my career and my life. Every one of them was important in shaping me. Here are just a few:

What about the detours you’ve had? Are you on one now? My advice is to learn all you can and trust that God will make the experience worthwhile.