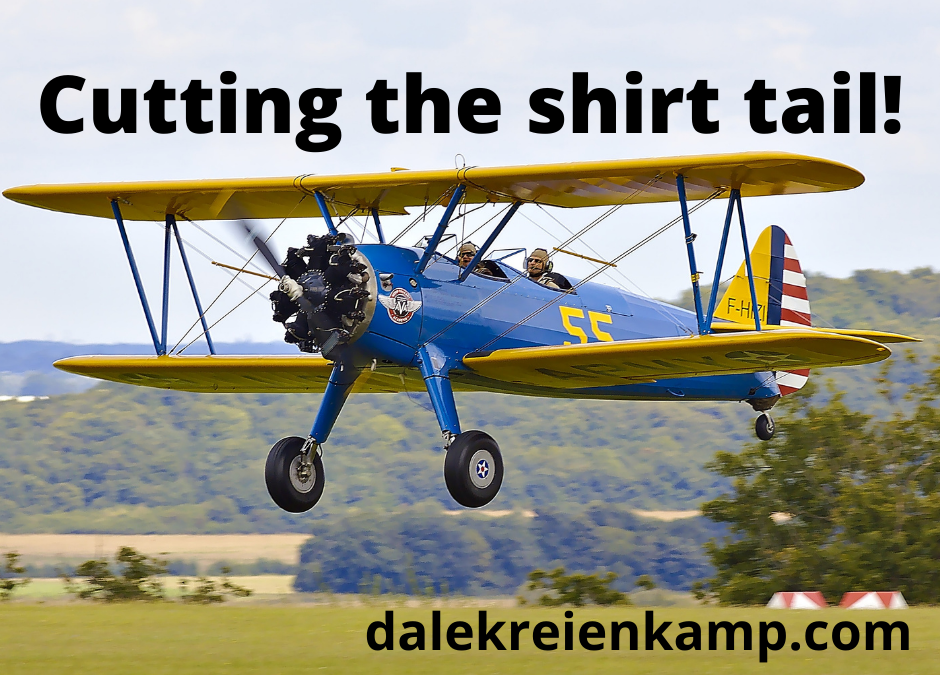 Recently I was a guest at the first graduating class of “Red Tail Cadets.” The program provided six high school students from the Ferguson-Florissant School District (St. Louis) to go through a 6-week rigorous program and learn to fly an airplane. The school district is not a wealthy district, and the students face many difficult environmental and life challenges. It’s a new and unique program. (If you’re interested in learning more, check out the Red Tail Cadet Program.)

As part of the ceremony, I learned each student had cut off and decorated their own shirt tail, an aviation tradition that dates back decades to a time long before the technology we have today was available. In those days, the student pilot was flying in a noisy open-air cockpit with the experienced pilot sitting behind them. It was so loud, the student couldn’t hear verbal commands, so the instructor used the student’s shirt tail to communicate instructions. Once the student pilot had a successful solo flight, they cut off the shirt tail as a symbol they no longer needed the instructor’s “hands on” assistance in flying. They had graduated and demonstrated they could fly on their own. I imagine there was pride not only for the student, but for the instructor.

That’s our job as parents and leaders, to prepare young people to succeed without us. We want them to become independent, not needy. I don’t think we are doing as well at this as we can or should be doing.

My observations over the last couple of decades is that too many young people have grown up without parents engaged in teaching them, many are products of a broken home. Others have been raised by “helicopter parents”, always hovering over their children, or “snowplow” parents, who push everything and anything that might be difficult out of the way for their children. Neither is good for developing young people to be ready to be successful in the workplace.

Leaders often bemoan that young people don’t want to work hard, they want everything instantly, and they aren’t good at critical thinking or decision making. I understand, I’ve seen it too.

Yet once they are in the work environment, shaping them is the job of leadership. Their growth will either be enhanced or stunted by the leaders they work for.

Some will work for a leader who holds onto their “shirt tail”, never letting go and making all the decisions. Yes, autocratic leaders still exist in the workplace. For some it can feel like “parents 2.0”. If you get one of those leaders, leave.

Young people need servant leaders who care about the success of each team member. Don’t misunderstand the word “servant”, it doesn’t mean they serve them by giving them everything.

Servant leaders have high expectations of performance, they want your best. They give each team member what they need to be successful because know each person is unique. What works for one, won’t work for another. One might need encouragement. Another needs discipline and structure. Others need to be pushed, or possibly re-directed. Others will flourish when given honest and candid feedback for the first time. Servant leaders do what is needed.

In the end, they want their team members to be successful and independent. When they succeed, they are ready to celebrate them, and cut off their “shirt tail” to let them soar onto the next responsibility or opportunity.

A refusal to correct is a refusal to love; love your children by disciplining them. Proverbs 13:24