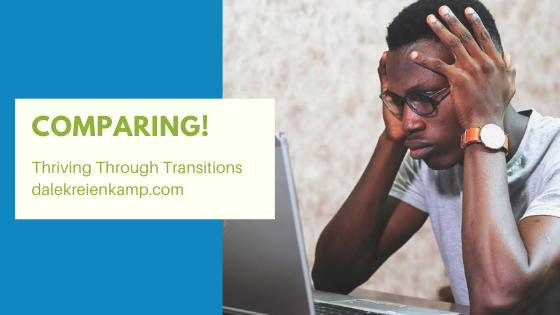 Seth, along with three others in his department, lost their jobs four months ago. Two of his former co-workers began new positions, and the third just accepted one he’ll start later in the month. Seth still hasn’t had an offer.

Heather will graduate college in just three months. She’s ready to start her career. Her closest friends have all secured positions before graduation. They’re getting to coast. She must keep searching.

Juanita, Seth & Heather are conflicted. They’re happy for their friends and colleagues, yet at the same time, they begin to wonder to themselves, Why haven’t I …? Will I ever …? And, Is there something wrong with me?

You may have heard that “comparison is the thief of joy.” It’s true. If you are comparing, you aren’t going to experience joy. So, let’s stop. We know we shouldn’t. We know it’s not good for us, so let’s quit!

My friends, if it were that easy, everyone would do it.

But it’s not easy.

If we’re honest with ourselves, we all have compared ourselves with others. Those comparisons often come with an unrealistic wish for something we don’t have. We don’t plan it; we just do it.

Most often, for me, it’ll happen when I’m emotionally low. Or, it will happen to me when I’m in a time of waiting, as things aren’t happening how or when I want them to.

It’s when we’re in the middle of a transition that we’re most vulnerable to comparison thinking.

When I compare, I don’t necessarily want what the other person has, but it gets me thinking about what I don’t have at that moment. For example, I drive a twelve-year-old Toyota Highlander. When I’m down, and I see someone driving a new car, it makes me wish I had one too. I don’t want their car, nor their payments. But at that moment, I really want a new car.

How do we get out of the comparing trap (or avoid it altogether)? I have three suggestions for you.

Spend time counting the blessings in your life: your family, friends, health, or whatever you consider a gift in your life. Spending time in gratitude will remind you how blessed you are.

When you were comparing, what did you wish for? Ask yourself what you would give up to have that wish fulfilled. What would you trade? I doubt you will think of anything.

This parable reminds me I have a generous God, and I should be thankful for what I have today. It’s the parable of the landowner who hired workers at different times throughout the day. At the end of the workday, however, he paid them all the same wages. They grumbled because they compared what they received based on how long they worked. Notice what the landlord says to them:

“But he answered one of them, ‘I am not being unfair to you, friend. Didn’t you agree to work for a denarius? Take your pay and go. I want to give the one who was hired last the same as I gave you. Don’t I have the right to do what I want with my own money? Or are you envious because I am generous?’ (Matthew 20:13-15)

Be thankful for what you have today and let God worry about how and when He shares His blessings.