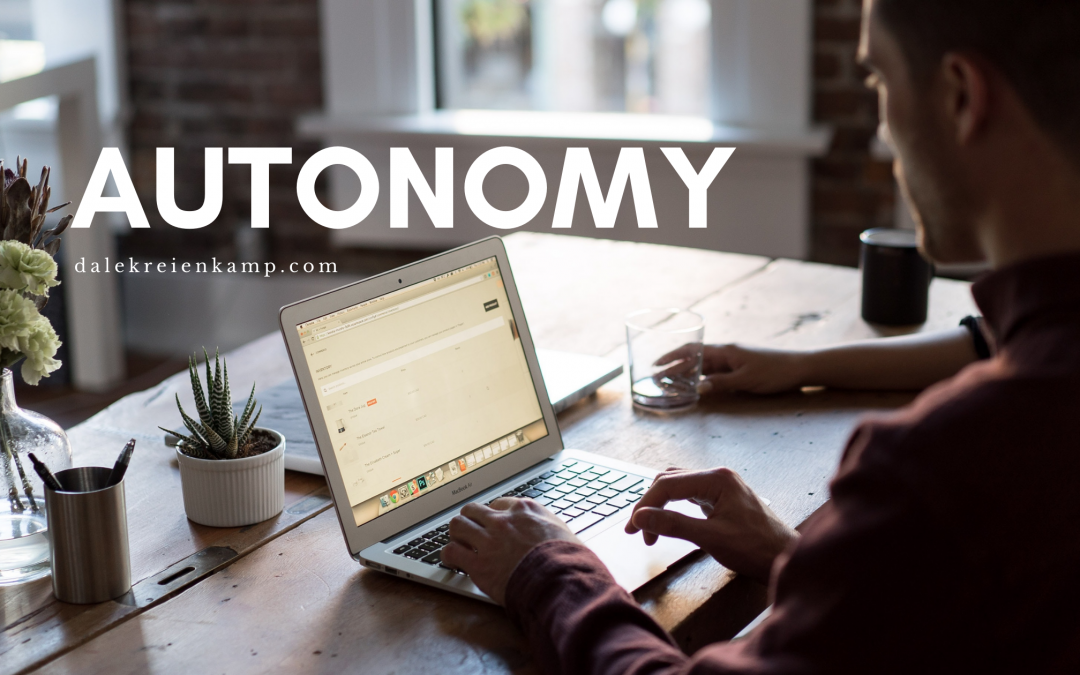 The Importance of Autonomy

My organization had merged with two others. I now reported to John who I liked. He gave me freedom to manage as I deemed best but kept his distance unless he was needed. This is how he treated everyone. It worked until Jon transferred to another city.

In came Sam who was the opposite. He asked a lot of questions, wasn’t trusting, and made a lot of changes to our processes. Real or perceived, I felt Sam was a micro-manager. He limited my autonomy, and I resented it. Likewise, he felt my resistance towards him and did not like it. Looking back, I probably could have handled the conflict better, but then again, so could he. From this experience, I learned many things about leadership and about myself, including my need for autonomy.

Autonomy means having control over decisions about how you do your work, allowing you the freedom to choose. Some jobs have more autonomy than others. Even the CEO of a company must relinquish some decisions to their board of directors.

For some people, autonomy is not that important. As a leader, I have had employees say, “Just tell me what to do, and I’ll be happy to do it.” Yet for most of us, we want some autonomy. We want to own the decision and are willing to be held accountable for the outcomes.

I learned that autonomy is incredibly important to me.  When I’m working, I’m like a chef. I don’t like someone else “in my kitchen,” telling me how to cook.  When I perceive someone is trying to micromanage me, it is a threat and I resist it big time.

If you are a leader, recognize the importance of giving autonomy to your team. Allowing them space to make decisions on their own signals you trust them. When you turn some control over to your team, you will get more back from them in productivity and loyalty. But you can’t just turn over control and hope for the best. It is wise to train them by giving them control over small decisions first. Then, as they prove to make them well, let them make bigger decisions. You want to help them be successful. Scripture gives us an example of this in the parable Jesus told about the talents.

“Again, it will be like a man going on a journey, who called his servants and entrusted his wealth to them. To one he gave five bags of gold, to another two bags, and to another one bag, each according to his ability. Then he went on his journey” (Matthew 25: 14-15).

You will help your team if you communicate about organizational strategy and priorities. It is also helpful to provide them with feedback. The more your team knows, the better they will be at making decisions. And the more they do on their own, the easier it will be for you as a leader.

If you are a leader taking over in a new department or in a new organization, you need to learn about the organization and about your team. It is normal to learn by asking questions. Yet be aware that your questions might be perceived as micro-management and a lack of trust. You will help yourself and your team to talk openly about it. Let them know the questions you will be asking are to help you learn, not a lack of trust in them and, as time goes on, you will have less and less questions.

When you give your team autonomy in decision-making, you will be the leader everyone wants to work for.