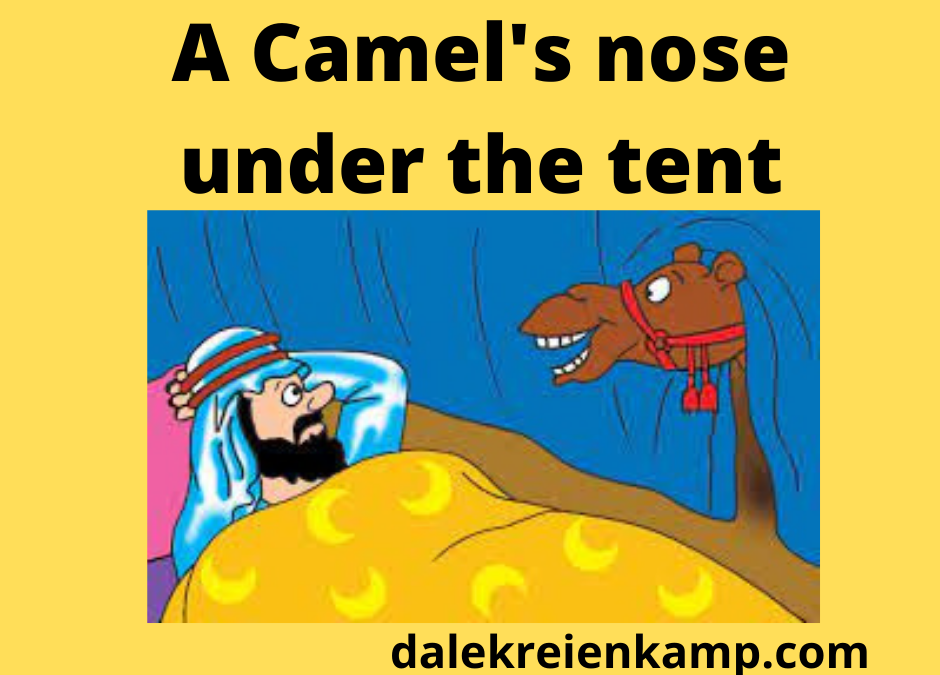 A camel’s nose under the tent!

Ever hear the expression, “a camel’s nose under the tent”? Maybe you laughed now or when you first heard it, but it’s a real expression about something that happens all the time.

It means something small, seemingly harmless, or insignificant, leading to a larger and more serious issue. Where it came from doesn’t matter, but if you open your mind, it’s easy to understand. Imagine for a moment you’re in a tent in the desert with no floor (not like the tents we have in America), and a camel puts his nose under your tent. If the camel gets more than his nose inside, maybe his whole head in, I doubt you can keep the rest of him out.

Leaders, and parents too, often hold fast to decisions they previously made, reticent to make changes for fear of getting more than the “camel’s nose getting under their tent” and being unable to prevent future consequences, both known and unknown.

A great example of this comes from scripture in the book of Esther. The current Queen, Vashti, was summoned to come see the king, but she said “no”. We aren’t told why. There could have been a great reason, but in those days, you didn’t disobey the King. After hearing this, the King’s advisors backed him into a corner and urged him to decide something he later regretted, all because they were worried about that pesky old camel’s nose.

Memucan answered for the others, “Queen Vashti has wronged not only the king but every official and citizen of your empire.  For women everywhere will begin to disobey their husbands when they learn what Queen Vashti has done.  And before this day is out, the wife of every one of us officials throughout your empire will hear what the queen did and will start talking to us husbands the same way, and there will be contempt and anger throughout your realm. Esther 1: 16-18

The advisors worried “if the Queen can do it”, then all the wives can talk differently to their husbands. Notice in the end, it was more about them and the relationship with their wives, not about the King and his wife.

Leaders often worry too much about setting a precedent if they say “yes” because they fear what’s coming next. They respond “no” to everything and say to themselves, “at least I’m consistent.” Sadly, that’s not great leadership. Anyone can say “no” all the time.

I imagine before the pandemic there were leaders being asked to allow staff to work from home. Instead of thinking it through, they just said “no”. They may have even lost some talented people because they wouldn’t adjust. The pandemic forced those same leaders to let people work from home, because work from home wasn’t a “camel’s nose” decision.

Great leaders keep the “camel’s nose” out if it’s about values and integrity. It’s not negotiable for them. They hold their leadership accountable for their behavior in how they treat staff. They demand honesty and transparency. They won’t allow cutting corners that undermine quality. They know when to be concerned about the “camel’s nose.”

I think leaders, and us too, should follow what Thomas Jefferson said,

In matters of style, swim with the current; in matters of principal, stand like a rock. – Thomas Jefferson