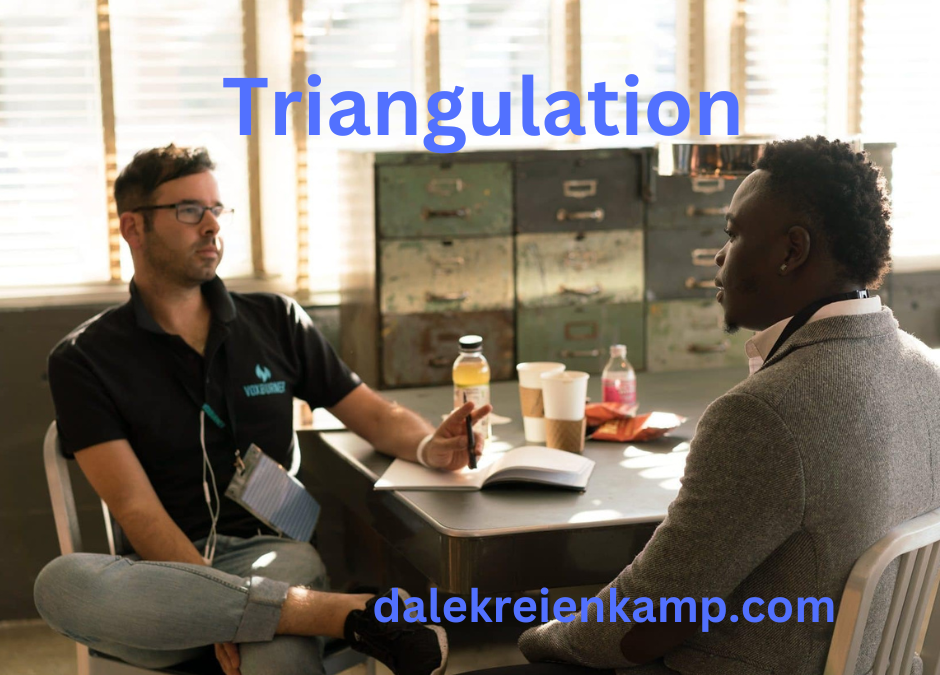 A Regional Vice President (VP) called me, the Organizational VP of Human Resources, based on what he heard from a community executive. She told him she was not pleased about what she had been told by one of her leaders, about what the local Human Resources Director had supposedly said to the community leader. I listened to him, shared what I believed she would have said based on our protocol, but indicated that I would call to confirm. So, I made the call to the community Human Resources Director, confirmed what she had said and reported back to the Regional VP who responded “Oh, that’s not what I had been told, that make more sense.”

I know, it takes your breath away thinking about what you just read and wondering how did this really happen.

Sadly, it happens in all organizations, we call it “triangulation”. Triangulation happens when Person A doesn’t communicate directly with the Person B, the person who has the needed information or is the person who needs to be aware of something. Instead, Person A chooses to communicate with Person C, who isn’t directly involved and seeks their help, thus creating a triangle of communication, or triangulation.

Triangulation, 1) wastes time by involving people who didn’t need to be involved and 2) breeds mistrust between people by not dealing directly with them. When triangulation is allowed in an organization, it will grow exponentially and soon everyone will be working around issues instead of communicating directly.

Triangulation isn’t hard to stop, but it requires you to recognize it and say “no.”

In the opening story, the Regional VP could have stopped it simply by asking his local executive if she had spoken to the community Human Resources Director. When she admitted she had not, letting her know she needed to speak directly with her and if it’s a problem to call him back. End of triangulation.

When he didn’t do that, I could have stopped it by telling the Regional VP I wasn’t going to do anything until the local executive spoke with the Human Resources Director. End of triangulation.

The best way to stop it would have been for the local executive to bring the leader who complained to her, and the Human Resources Director into the same room to talk through the issue. Great direct communication and no triangulation.

We can get sucked in because we want to help. Someone needs us and we all like to be needed, so we drop what we’re doing and charge up the hill blindly to do work they should be doing, not us. I find it even more troublesome when it happens with leaders, who should know better, but they too want to help and sometimes mistakenly trust their people blindly. I know because I’ve made that mistake myself.

You will never help someone doing their communication for them. If they haven’t spoken directly with the person, here are two ways you can help them.

Keep your eyes open so that you don’t get trapped in a communication triangle. Set an example by speaking directly with others, never through another person.

An unreliable messenger can cause a lot of trouble. Reliable communication permits progress. Proverbs 13:17 TLB